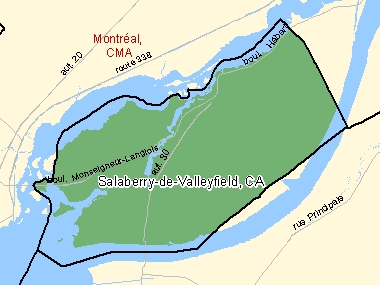 In 2011, the population of Salaberry-de-Valleyfield census agglomeration (CA) was 40,077, representing a percentage change of 1.0% from 2006. This compares to the national growth of 5.9% and to the average growth among all CAs of 4.2%.

Census subdivisions in the Salaberry-de-Valleyfield CA

Salaberry-de-Valleyfield – Median age1 of the population

The median age in Salaberry-de-Valleyfield was 47.1 years. In comparison, the median age of Quebec was 41.9 years.

In Salaberry-de-Valleyfield, 47.1% of census families were married couples in 2011, while 34.4% were common-law-couples and 18.4% were lone-parent families.

Among couples with children aged 24 and under at home in the census agglomeration of Salaberry-de-Valleyfield, 76.5% were intact families, that is, in which all children were the biological or adopted children of both parents, while 23.4% were stepfamilies, in which there was at least one child was the biological or adopted child of only one married spouse or common-law partner. For Canada as a whole in 2011, 12.6% of couples with children aged 24 and under were stepfamilies.

The remaining 46.4% were not married and not living with a common-law partner, including those who were single (never-married), separated, divorced or widowed.

In Salaberry-de-Valleyfield, 47.3% of private households lived in single-detached houses and 0.9% lived in apartments in buildings that have five or more storeys. The rest lived in other types of dwelling structures.