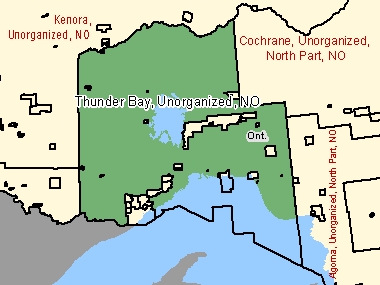 Map of Thunder Bay, Unorganized, NO

Chart A description: Thunder Bay, Unorganized, NO - Population, 2011 and 2006 censuses

Thunder Bay, Unorganized, NO – Median age2 of the population

In Thunder Bay, Unorganized, 75.7% of census families were married couples in 2011, while 15.8% were common-law-couples and 8.6% were lone-parent families.

In Thunder Bay, Unorganized, 91.7% of private households lived in single-detached houses and 0.0% lived in apartments in buildings that have five or more storeys. The rest lived in other types of dwelling structures.