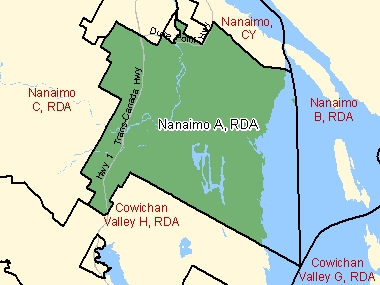 Map of Nanaimo A, RDA

Nanaimo A (Regional district electoral area) is part of the census agglomeration of Nanaimo (British Columbia).

Nanaimo A, RDA – Population by broad age groups and sex

Nanaimo A, RDA – Population by five-year age groups and sex

Nanaimo A, RDA – Median age1 of the population

Nanaimo A – Presence of children within couple families

The remaining 36.2% were not married and not living with a common-law partner, including those who were single (never-married), separated, divorced or widowed.

Nanaimo A – Types of private households

Nanaimo A – Structural type of dwelling

In Nanaimo A, 80.3% of private households lived in single-detached houses and 0.0% lived in apartments in buildings that have five or more storeys. The rest lived in other types of dwelling structures.