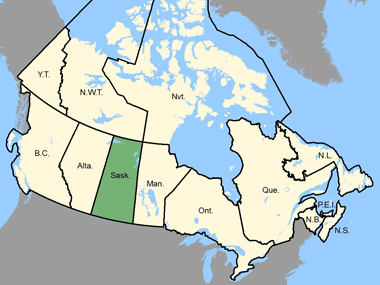 In 2011, 60.9% of the population of Saskatchewan lived inside a census metropolitan area (CMA) or census agglomeration (CA). That represents 628,978 persons.

The number of persons living outside a census metropolitan area (CMA) and a census agglomeration (CA) was 404,403 which accounts for 39.1% of the provincial population.

Saskatchewan – Census subdivisions, with 5,000-plus population with the highest population growth

Saskatchewan – Census subdivisions, with 5,000-plus population with the lowest population growth

Saskatchewan – Median age2 of the population in the last 90 years

Chart E description: Saskatchewan - Median age of the population in the last 90 years

The remaining 41.6% were not married and not living with a common-law partner, including those who were single (never-married), separated, divorced or widowed.

In Saskatchewan, 74.0% of private households lived in single-detached houses and 2.6% lived in apartments in buildings that have five or more storeys. The rest lived in other types of dwelling structures.

Saskatchewan – This province has the following data quality indicators (commonly referred to as data quality flags):