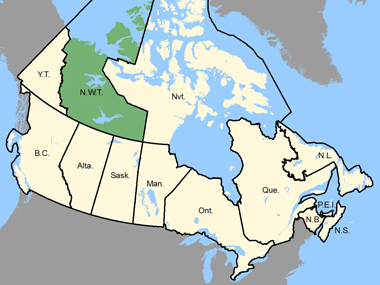 In 2011, 46.4% of the population of Northwest Territories lived inside a census metropolitan area (CMA) or census agglomeration (CA). That represents 19,234 persons.

The number of persons living outside a census metropolitan area (CMA) and a census agglomeration (CA) was 22,228 which accounts for 53.6% of the territorial population.

The median age in Northwest Territories was 32.3 years. In comparison, the median age of Canada was 40.6 years.

In Northwest Territories, 50.0% of census families were married couples in 2011, while 28.7% were common-law-couples and 21.3% were lone-parent families.

In Northwest Territories, 58.4% of private households lived in single-detached houses and 1.5% lived in apartments in buildings that have five or more storeys. The rest lived in other types of dwelling structures.