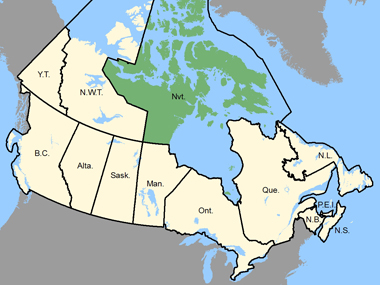 The remaining 46.6% were not married and not living with a common-law partner, including those who were single (never-married), separated, divorced or widowed.

In Nunavut, 51.3% of private households lived in single-detached houses and 1.8% lived in apartments in buildings that have five or more storeys. The rest lived in other types of dwelling structures.

Nunavut – This territory has the following data quality indicators (commonly referred to as data quality flags):

Data quality index showing a global non response rate higher than or equal to 10% but lower than 25%.