Cartographic boundary files (CBFs) portray the boundaries of standard geographic areas together with the shoreline around Canada. Selected inland lakes and rivers are available as supplementary layers.

The boundaries of the geographic areas reflect those in effect on January 1, 2016 (the geographic reference date for the 2016 Census of Canada).

Cartographic boundary files are created by integrating Canada's external shoreline with the selected source boundary layer from the Spatial Data Infrastructure (SDI). The boundaries extending into water bodies are 'erased' and replaced by the shoreline and offshore islands. The hydrographic features are also from the SDI. Further adjustments are made, such as the feature selection and the ranking of features for scale-dependent mapping.

Cartographic boundary files (CBFs) are intended for thematic mapping and analysis purposes. The positional accuracy does not support cadastral, surveying or engineering applications. CBFs can be used in conjunction with road network files (RNFs), since both products are derived from the same sources, and features are generalized in the same manner. The roads in RNFs provide additional geographic context when used with CBFs. CBFs can be used with Census of Population, Census of Agriculture or other Statistics Canada data. Geographic codes provide the linkage between the statistical data and geographic areas. 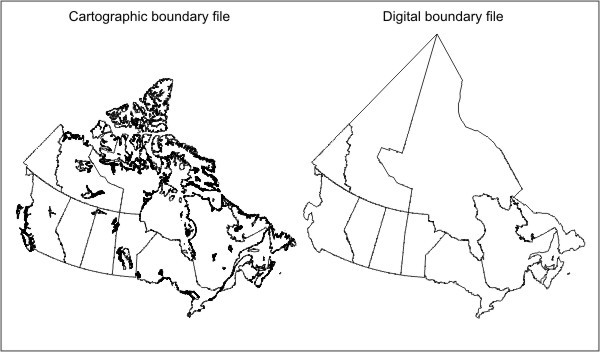