The 2016 version of the SGC includes four classification variants: 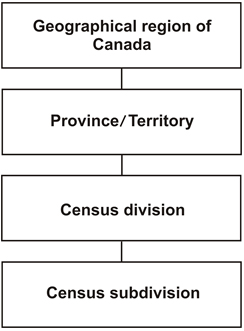 The hierarchical relationship is reflected in the seven-digit SGC code. For example:

Changes to the Standard Geographical Classification for the 2016 Census

This version introduces the new classification variant 'Agricultural Regions – Variant of SGC 2016.' This variant includes census agricultural regions and census consolidated subdivisions, both of which are used by the Census of Agriculture for disseminating agricultural statistics.

In 1976 and 1971, both SGC and census codes were used to disseminate census data.