The secondary core is a population centre with at least 10,000 persons (based on the previous census) and that is within a CMA or CA, but outside the main municipality (census subdivision) that contains the core. The secondary core can also be the core of a CA that has been merged with an adjacent CMA.

While every CMA and CA has a core, it may or may not have a secondary core, a fringe or a rural area. See Figure 1.12. 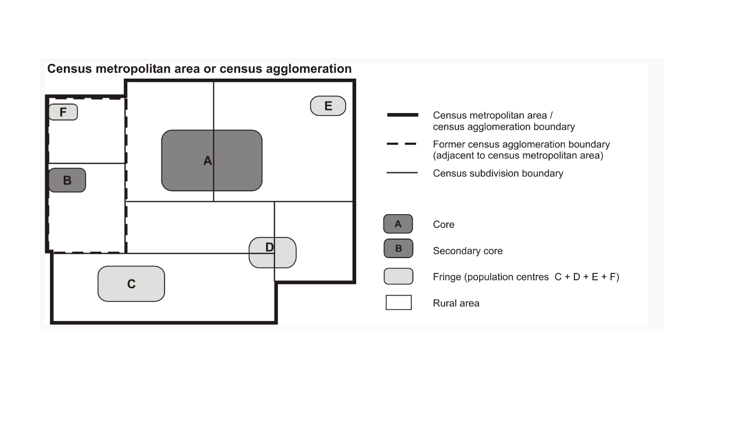 Beginning in 2001, the concept of the secondary urban core was used to describe the urban core of a CA that merged with an adjacent CMA.

Prior to 1996, this concept was known as CMA/CA parts.

Beginning in 1986, primary CMAs (PCMAs) and primary CAs (PCAs) were delineated within some CMAs and CAs. Because of this change, some urban areas that were urban fringes of 1981 CMAs or CAs became urban cores of 1986 PCMAs or PCAs.

For 1976 and 1971, the urbanized core was further broken down into the 'largest city' and 'remainder.'